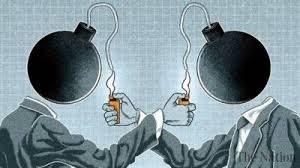 Markets are being buffeted by fears of a trade war, as the US and China increase rhetoric on trade.

Markets are up one way, down the next as markets try to figure out the long term implications of trade rhetoric.  Let's try to cut past the fear mongering, bluster, and sensational headlines and determine what we know for fact.

The truth is, China has been unfair in its trade practices for years.  And efforts to get them to reform, open, and play by the rules have largely failed.  It seems that Trump is trying (as he promised) to shake things up in the hopes of driving meaningful change in the trade relationship. Whether this is a shrewd negotiating tactic or playing with fire near an open gas can remains to be seen, but Trump did promise to shake things up - and he is doing that!

Shaking things up is never good for the markets, however.  And there is risk to this approach.  Markets hate uncertainty, and uncertainty abounds in this situation.  The market is bouncing around daily, up one day, down the next based on news flow and speculation about where all this trade bluster leads.  For the past couple of months though, the down days are outweighing the up days.

As I see it, there are two potential outcomes.

The SANE outcome.  Both sides bluster, threaten, impose some tariffs, then negotiate an agreement which they take home and brag about.

The INSANE outcome.  Both sides escalate, with new tariffs leading to counter tariffs, etc.  Neither side ends up better off – inflation will increase, major industries will be disrupted.  The political pressure on Washington and the administration to back down from such an approach will be tremendous.

If we look at previous actions by this administration, I think that (while the president’s sanity may at times be questioned…) the saner outcome is the likelier outcome.

NAFTA.  For all the bluster about tearing up NAFTA and what a bad deal it was, we appear on the verge of a new agreement (probably not all that different from the old one).

North Korea.  After all the bluster about Rocket Man, etc. – things appear to have calmed down and dialogue is increasing.  The taunts and missile tests have largely subsided.

Markets will be on edge until this begins to resolve.  As of now here is what we know:

So what about investment strategy?

Everyone talks about “buying the dip” – that is, to invest more money in stocks when stocks are temporarily down.  This is not a bad strategy, except that we have not had a truly meaningful dip to buy in almost 3 years.  Now we may be getting there.  We have been underweight stocks in most of our portfolios for a long time, to our own detriment I might add!  Historically times of market turmoil have been the best time to add to stock positions or to invest new money.  While we cannot see into the future, and literally anything could happen, there is really no good reason to think this correction is any different than any other.  Good investors look at turmoil and see a silver lining of opportunity.

Remember - it is NORMAL for stocks to have 10% corrections (nice term for losses) every 12-18 months.  Normal time to recover from a 10% loss is about 3 months.  So this move so far, by itself, is not at all unusual and may be a sign of a normally functioning market.

Meanwhile, bonds have been strengthening a little bit, which has limited the impact on diversified portfolios.  It is admittedly hard to get excited about bonds still yielding less than 2.8%, but this year at least, we are glad we own them.