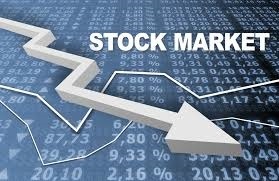 Stocks have been selling off the last few days.  This time, unlike February, the move looks less like a computer generated frenzy, and more like a good old fashioned market correction.  What is driving it?  Well, the media blames it on President Trumps announcement of tarrifs on Chinese goods, and general fear of an escalation in trade tensions.  If this is the case, it is the first time since the election that the market has shown a sustained negative reaction to any of Trump's tweets or policies.

I suspect there is more going on than this.

In early February, we saw stocks sell off sharply for a day or two, only to then bounce back.  But that selloff seemed to remove a logjam of sorts in the market that was keeping stocks artificially high and unusually stable.  Prior to that event, the stock market had been breaking every record for tranquility.  It just kept moving up - slowly but surely.   Since that time, volatility has remained elevated, and both up and down movements of stocks have been much more like normal.  So the market was already poised to pull back a bit, it just needed a trigger.

It is important to keep that in mind.  A volatile stock market is NORMAL.  We EXPECT a 10% correction on average every 12-18 months.  The past 3 years have been an aberration.  In fact, occasional downturns in the market are quite healthy, as they help the market blow off steam, and prevent 1999-like bubbles from getting out of hand.

Investors with diversified portfolios will be pleased to hear that over the last few days, bonds have performed well in comparison, as investors fled stocks and sought the relative safety of bonds.  With rates low, we own bonds less for the yield (which is improving, but still anemic) and more for the relative safety they offer when stocks are falling.

"Is this the start of something bigger?" people will always wonder.  And truth is, you can never know.  We know the economy remains strong, employment is strong, profits are high.  Corrections and downturns which occur under strong economic conditions rarely have staying power.   The current president is certainly a wild card, and we hope sane heads prevail when it comes to trade negotiations and the like - but ultimately we can't predict tomorrow's news or tomorrow's market.  My advice to investors is the following:

1. Invest your money for long term growth in stocks - because over the long run stocks have always provided a higher return than the alternatives

2. Accept that periodically the "stocks" part of your portfolio will fall by 10%, 20%, or occasionally more than that!  10% and 20% stock losses are NORMAL and on average reverse themselves fairly quickly.

3. If such losses are difficult for you to face, or will destroy your financial plan, then add bonds or fixed income to your portfolio ("diversify").  Returns are lower, but so is the risk.  And bonds often (though not always) move the opposite direction from stocks.  The higher percent of your portfolio in bonds, the lower the return you can expect to make - but the lower your losses will be when stocks take a tumble.

3. Remember the "once in a lifetime" losses of the financial crisis only took 3 years to reverse, for those who were patient enough to wait.

4.  Money that you need over the next few years should not be invested in stocks.  Cash and CD's are a better choice for money you expect to spend in the next year or two.

5.  Stick with your strategy.  Moving in and out of stocks and swinging from aggressive to conservative based on the flow of news or the recent moves of the market is not a recipe for long term success.  Build a portfolio based on your risk tolerance and stick with it.