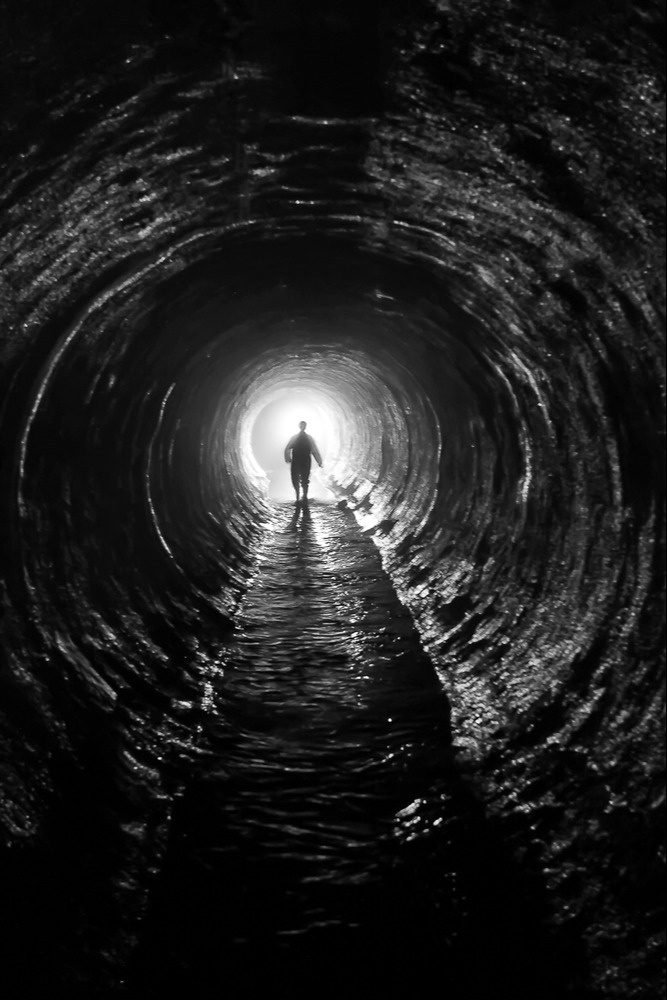 Going through these bear markets (and surviving them) is much like being in a scene from an action movie.

Cue this scene.  You are on a journey.  You enter a tunnel.  You don’t know where it is going to lead.  You can’t see where it is going.  Behind you a rockslide which seals off the way you came in.  You can’t go back to where you were.  No one knows where you are, so there are no rescuers coming to dig you out of the hole.  You have two choices – move forward blindly in the dark until you come out the other side, or give up, stay where you are, and survive so long as you can on the rations you carry in your rucksack.  Terrifying though it may be, you know there is only one way out and that is to grope forward in the dark until you find your way out the other side.

For a while it seems the tunnel is going deeper and deeper into the earth – and it is terrifying being in the dark as you head deeper into the earth.  Yet, along this journey you have already traversed several of these tunnels in much the same way.  Each one has been different in some way, but in every case the exit was invisible until you were almost out the other side.  Some of the tunnels seemed to stretch on and on – testing your resolve and fortitude.   (how about the almost 3 year long internet bust of 2000-2003?)  Some were particularly terrifying, making you doubt if there was any way out.  (how about the Financial Crisis of 2007 and 2008 which was incredibly intense and lasted for 18 months?).   Some were even more terrifying (the COVID scare of 2020) – but by plunging ahead you were soon exiting into the sunshine again.

And so here we are in another tunnel.  The S&P 500 now is almost 20% down from its peak – the usual definition of a bear market.  If it reaches that point, which seems more likely than not, it will be the fourth bear market of the 2000s (which is about average for frequency of such events over the course of stock market history).   They have ranged in duration from the very short (2018 and 2020) to the very intense (but not all that long lived) 2007-08 crisis, to the long drawn out 3 year bear market of 2000-2003.   All of these  were terrifying in their time.  You could never see the way out (until you were already there!).  And in every case, those who plunged ahead came out alive.  Those who gave up halfway through did not.

Again, we have no idea how long it will last.  How long until inflation slows down?  Is a recession inevitable?  How high will interest rates need to go?  The market grapples daily with all of these questions – to which there really are no definitive answers.  Only on faith can we again say “this too shall pass”.

There are some signs of light.  The bond market has recently stopped its descent, levelled off, and provided somewhat of a buffer against falling stock prices yesterday.  That means that as far as the bond market is concerned, inflation (and Fed tightening) will come to an end and interest rates will level off.  Good news for the bond market is not always good news for stocks, however.  A recession is good for bonds (the Fed would have to reverse course and start lowering rates again – which is good for bonds).  Such an outcome is bad for stocks however, and we have seen that reflected in recent volatility and fear in the stock market.

The other good news is that you don't have to go through this alone.  If you find current events unsettling, if you are in need of reassurance, reach out and give us a call.  Your financial plan (and your experienced advisor...) can give you some reassurance that you are on the right path, even when that path gets a bit dark and gloomy.   Even if we just have to grit our teeth and plunge forward in the dark, at least we are doing so together.