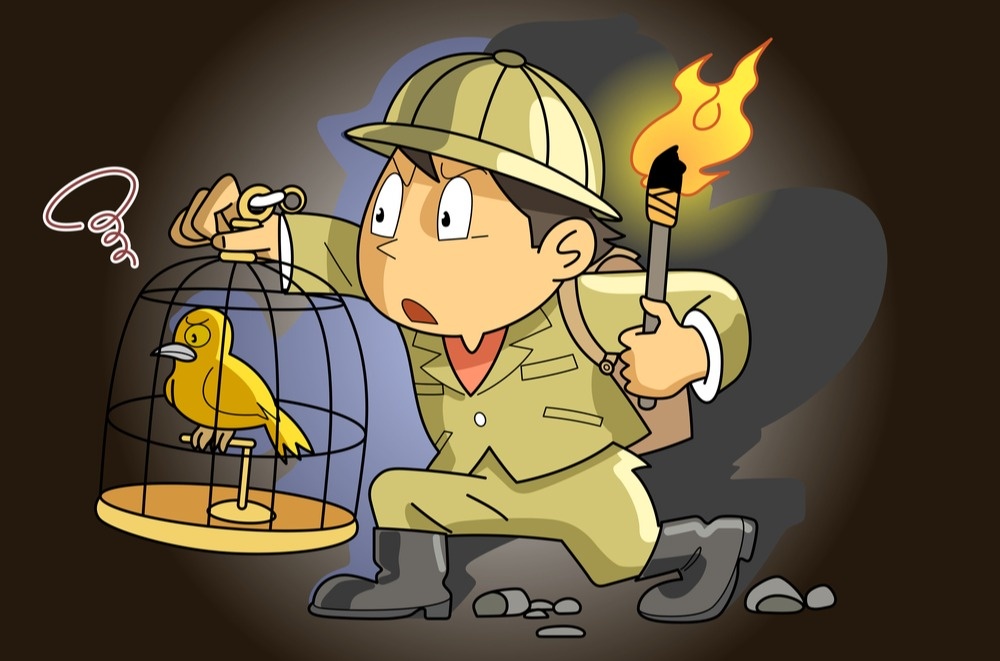 Canaries in the Investment Coal Mine?

The Markets Most Bubbilicious Investments Turn South as the Fed Prepares to Tighten Money Supply.

First of all, I have to admit that I feel a bit of schadenfreude in this.  Over the past month, the past year's most ridiculous speculative investments have been falling rather precipitously.  GameStop, the unprofitable video game retailer, and AMC (movie theatres) are virtual definitions of the newly coined term “meme stock”.  For those still unfamiliar with the term, lets define “meme stock” as stock in a company which soars far beyond its value based solely on internet chat board hype.  These stocks are largely spurned by serious investors, but gobbled up by inexperienced, mostly young, retail investors with little knowledge or patience for old fashioned concepts such equity valuations.  They are the modern equivalent of the early internet stocks which we boomers gorged on the in 1990s only to watch them suddenly implode in the 2000-2003 bear market.  I’ve highlighted the parallels before in this blog.

Gamestop stock has fallen from $247 per share on Nov 22 to $147 per share.  (no…I’m not running out to “buy the dip” – its still ridiculous!)  Another millennial darling stock is AMC Corp, the movie theatre chain.  It had rocketed to stupendous heights despite the fact that, frankly, no one goes to the movies anymore and the company is losing money hand over fist.  Since Nov 16, AMC has fallen from $44 per share to about $24 per share.

And then there is the mother of all bubbles – Bitcoin.  The fundamentally worthless digital token which many are convinced is the future currency of world commerce has fallen from a high of over $63,000 to just over $47,000 since Nov 7.  (I completely expect the hate mail, so bring it on!!!)

Us stodgy traditionalists believe that investment prices actually have meaning, and should be backed up by something real – such as companies that make money for their investors, or bonds that entitle their owners to interest payments over time.  So the recent fall of these high flying but basically worthless assets leaves us with a vague sense that maybe all is right with the world.  But at the same time, the recent decline of these highly speculative investments does get me to thinking about the economy and the rest of the market.  And of course, the big worry on everyone's mind these days is inflation.

By now everyone gets that inflation is back.  Looking back over my musings on the economy over the years, I have consistently said that a return of inflation is the one thing that worries me more than anything else as a financial planner and investment manager.  The reason inflation is so worrisome is that there is no clear and certain investment strategy.  Generally speaking, bonds will lose value as interest rates inevitably increase in the face of inflation.  But if increasing interest rates tip the economy into recession, bonds will rally and help protect your portfolio. Stocks are widely touted as being resilient, since companies can raise their prices, and therefore profits. But again, as interest rates rise, stock valuations may fall – especially for the most speculative of stocks.  That would include the high growth technology stocks that have driven the stock market boom for these past few years.  And of course, the most speculative fare of all – the meme stocks and cryptocurrencies which owe much of their value and success to the fact that the world is awash in cheap money.  So if the likes of Gamestop, AMC, and bitcoin are falling, that could mean higher rates ahead, and difficult sledding for interest sensitive parts of the market.

Which investments will do best in an inflationary environment depends on how long the inflation lasts, how high it goes, and how strongly the Fed fights it.  You would think real estate would perform well when inflation is hot – and it can – unless high interest rates quash the real estate market.  Even inflation protected bonds and commodities are no panacea.  TIPs are helpful as long as inflation expectations are ratcheting upward – but stand to suffer if interest rates rise rapidly, threatening an end to the cycle.  Commodities may keep up with inflation – but can be highly volatile in their own right and can tumble sharply if inflation tips into recession.  Stock returns often outpace inflation – unless higher rates tip the economy into a recession.  In short, there are no magic silver bullets.  In a best case scenario, inflation pressures gradually ease as government stimulus ends and the Feds bond buying binge comes to a close, but as is often the case – we just don’t know.  And when we just don’t know (which is all the time I suppose), diversification is usually the answer.

Much therefore rides on the Feds ability to quash inflation without killing the economy in the process.  The Fed announced this afternoon that it is going to wrap up the asset purchases which have been helping to fuel the speculative bubbles by late winter.  This will lay the groundwork for them to start to raise interest rates to fight off inflation.  Their forecast is for gradually moderating inflation over the next two years, with gradually increasing interest rates.  That would be nice.  In fact, a return to somewhat higher (more normal) interest rates would be welcome.  And the market reacted positively to the Feds announcement and press conference, with stocks sharply higher at the end of the day.  So for now the smart money is on continued economic growth, slowly increasing interest rates, and gradually moderating inflation pressures.

What gives me some pause is that the Feds track record in balancing growth vs inflation is not very good.   The only tool the Fed has to fight inflation (interest rates) is a very blunt tool.  It often takes a heavy hit with that tool to make a difference.  This is why interest rates had to go up as high as they did in the 1970s and early 80s (18% mortgage rate anyone?)  The problem is that rates high enough to quash inflation (once it gets established) are likely high enough to tip the economy into recession.

Theoretically, Congress and the President have more effective tools at their disposal than the Federal Reserve.  Raising taxes and reducing deficit spending would theoretically have a more immediate and less damaging impact. Just as lowering taxes and increasing spending can stoke the economy, the opposite can slow it down when it runs too fast.   But don’t hold your breath waiting for an inflation fighting strategy from Congress.  It is hard to run for election on a platform of raising taxes and holding the line on spending.  Even if that might be just what the economy needs!

Our general strategy is to maintain a healthy equity exposure but increasing allocation to our more defensive positions.  Bonds still have a place in a portfolio, but need to be selected with care.  Now is not the time for broad based bond index funds with heavy allocations to 15, 20, or 30 year bonds. These bonds stand to lose the most value if interest rates rise suddenly.  Not all fixed income is created equal, however.  While long term bonds suffered terrible losses when interest rates soared in the late 1970s, we may recall short term bonds and money markets yielding 8, 10, or 12%.  We have been reducing our holdings of preferred stocks, which we have held for many years as a more profitable alternative to bond funds.  We believe these high yielding stock/bond hybrids are at risk if interest rates jump higher.  We may also increase cash (even though cash loses value to inflation) somewhat as a defensive measure.

So yes, like most folks, I am a bit worried about the future.  But I’ve been worried about the future before.  Frequently.  In fact, most of the time.  In the end we have little choice but to climb that wall of worry and see what is on the other side.  All I want for Christmas this year is stable (if higher) interest rates, continuing growth, and moderate inflation. Is that too much to ask?  Honest Santa, I’ve been good!